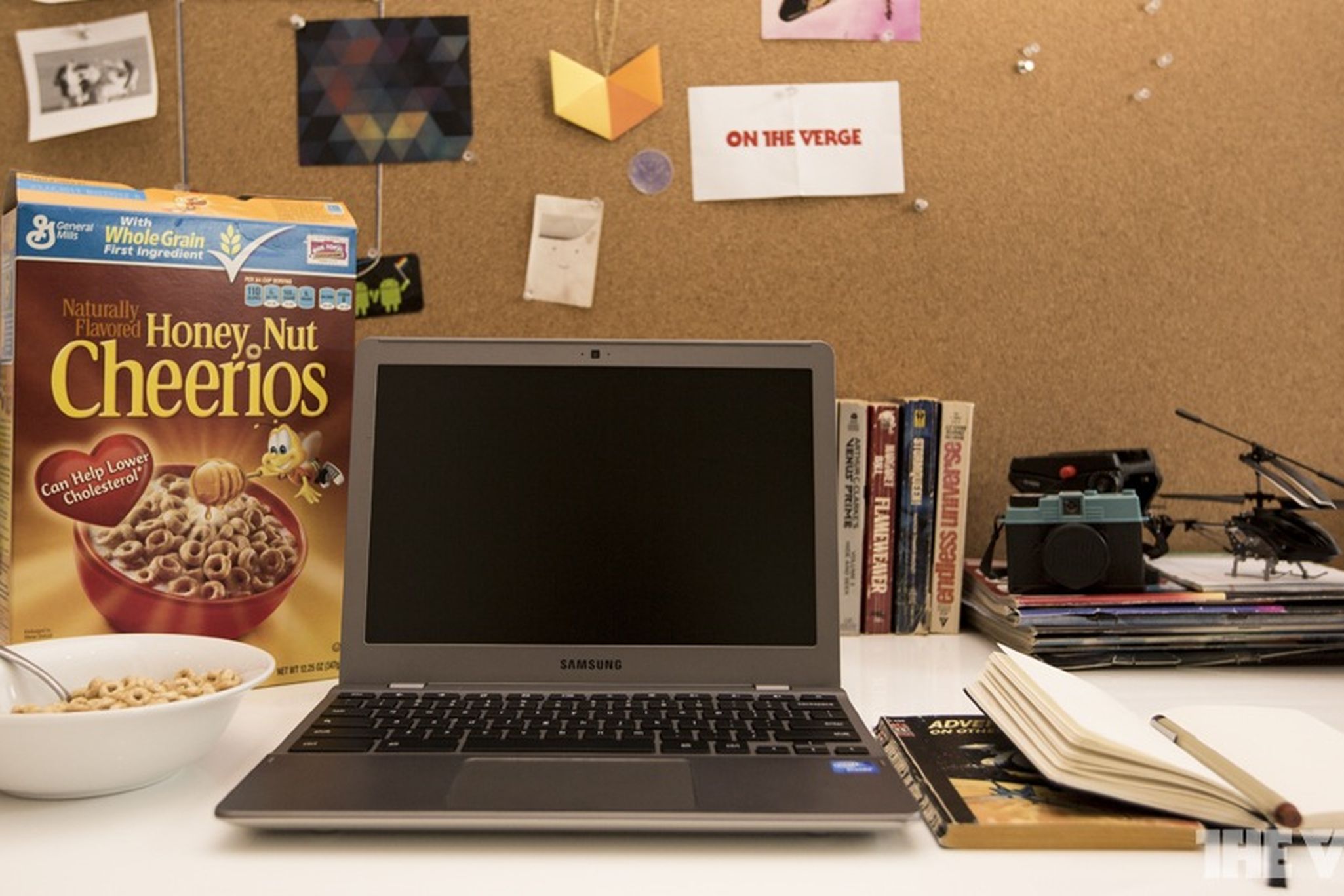 I was lucky enough to be asking to be on a panel at this month’s NYC meetup to discuss the value, challenges, and advantages of a 1:1 program. I was thrilled to be included, but my little not-so-secret is that we actually have no 1:1 program at my school. Instead, I’ve set up what I’ve started semi-jokingly calling our 1:whatever program, primarily using Chromebooks.A little history.

Google first introduced the Chromebook in the summer of 2011, along with a really enticing pricing model for education: subscribe to the hardware, don’t buy it. $20/month/unit would get you the hardware, Google support, cloud management from the web-based admin console (part of your Google Apps for Education dashboard, actually) for a 3-year term.

READING INTO THE VALUE AND IMITATIONS OF CHROMEBOOKS

The initial offer was fantastic: sign up, get the Chromebooks, use them for three years, keep the old hardware at the end of three years and get new equipment if you sign up for another term.

That didn’t last. Sadly. Google didn’t want to stay in the hardware, billing and sales game, and shifted the model slightly so that sales of the units are now actual hardware cost upfront, plus $30 for lifetime management and support. Hardware warranty now (sadly) shrinks to a year or whatever the manufacturer offers, and repairs go through the OEM, not Google.

Because the subscription model was amazing, and I had a small staff and a large user base that primarily needed web and Google Apps access, we jumped in. We got three class sets, then replaced all our Dell laptops in the Library, then added additional units for other class sets, self-services carts, and smaller collections students could check out from offices. It’s obviously harder to do this now, since large orders have a large price tag, instead of the glory days when you’d just pay by the month (sad face).

(Some practical lessons: have a good sign-out system (we use Google Calendar and sign-out slots) and suitable charging carts or Chromebook lockers, and perhaps some rolling cases (we used the pick-n-pluck to make it easy to run off with a full class set).

Make sure you have excellent dual-band WiFi and note the configuration tips below at the end of this post. Additionally, for printing, I would recommend a dedicated Cloud Print server – some always-on machine that all your networked printers are installed on/added to with the Cloud Print server running on it.)

Back to the panel. At last month’s meeting, Jay really got me thinking about the value of iPads; he made a really compelling argument that (heavily paraphrased language follows) “working within a single platform allows you to curate an amazing experience on that platform that is consistent for all your users” (please correct me if you remember what you actually said, Jay!), which is totally true, and perfectly sums up why a 1:1 iPad program can be utterly amazing if you do it right.

Many on the panel noted that one of the main goals of a 1:1 program and edutech in general at present is enabling access: getting technology the hell out of the way so that students can actually find/research/create/share/communicate at the moment without the technology becoming the activity.

Properly implemented 1:1 can do this. However, there are many practical considerations that drag along behind this like a cartoon prison ball. Can your school afford the FTE’s or contractors (or leasing) needed to support all that hardware? Do you have policies or a faculty that can deal with constant distraction presented by a student-attached device? Can you afford all the hardware itself?

This goes a long way in further explaining why something like Chromebooks was a good practical option for us to explore. We have a small staff (myself and three amazing technologists), a large student body (over a thousand), and a few hundred faculty and staff. We needed a hardware system that would require minimal staff hands-on time for any and everything (updates, fixes, installs, troubleshooting),

Be inexpensive to purchase, deploy and replace (even purchasing outright, you can get four 11″ Chromebooks for the price of a single 11″ MacBook Air!), meet the needs of our students and faculty (again, almost everything was web or web app-based) and be fast and easy to use.

So here we are. Now there are caveats to using Chromebooks:

But that said, as I’ve mentioned twice above, for > 90% of your users, this may not be an issue. Things like video editing or desktop publishing will always need a media lab with beefy processors, a desktop OS, and big screens (though maybe not too much longer for video editing…), but really, step away from Creative Suite Cloud (oh Adobe, why have you forsaken us?) and why do you need a true computer? Honestly. Chances are you don’t.

So the strengths? There are several. Going back to the aforementioned idea of access: as long as you can place carts or sets of them nearby enough that they can be had easily with sign-out/advance planning or within a few moments of a neat spontaneous idea, they go from cold boot to sign on in literally fewer than ten seconds.

Once a user is signed on, their bookmarks, their extensions, Chrome apps (including the ones you’ve selected for them), heck even their Chrome theme all sync down. This enables a student to grab one, sign on, have an experience, and then continue that exact same experience wherever they log in to Chrome next, using the desktop browser at home or on another Chromebook anywhere else on campus later on.

Files can’t get lost, hard drives dying becomes moot, and perhaps one of the biggest barriers of all to access is removed: the hardware itself, because the thing that’s being used as a computer is really just a cute dumb terminal, like back in the old days.

Along those lines, Chromebooks are a lousy choice for a 1:1 device, only because it defeats the purpose! They’re meant to be shared, and there’s no point in buying 1:1 hardware if you can get enough so that 1:whatever works: people should be able to access one where and when they need to, and it’ll take some time and planning to figure out what the right numbers are.

But perhaps the biggest strength is something that didn’t occur to me until a comment made in the final minutes of the NYC meeting. Someone noted that we are always teaching students to use a certain collection of technologies that seem like the right idea at the same time, but many become obsolete or overly proprietary in time.

While this certainly could be true of things like email, in general,/Gmail, Google services, certain educational sites that are popular at present, etc., unlike any other piece of hardware, Chromebooks do not present a risk of teaching students a platform that will not exist.

READING INTO THE VALUE AND IMITATIONS OF CHROMEBOOKS

Let me put that another way: devices like iPads, Nexus tablets, laptops with keyboards, hybrids like the Surface Pro – all of these are hardware platforms with their own software ecosystems, and by committing to any of them, you are placing a bet.

Some are safer than others (BlackBerry Playbooks for everyone!), but you’re still opting for one at the expense of whatever the others might offer (and more critically, teaching students how to use a system that may or may not endure into their adult years).

VHS beat Beta, but was killed by DVD; HD-DVD lost to Blu-ray, but the thing that was consistent throughout was the video itself. Similarly, among the various app ecosystems on the different tablet/desktop OS platforms, there is also a consistent thread: the web.

admin - February 13, 2020 0
Corsair may be one of the biggest organizations in the PC advertising today, offering multiple products in fact, but that was not the situation...

admin - February 4, 2020 0
VPN master is available only for android and IOS devices. VPN master is used for changing the internet access from one country to another...

admin - January 2, 2020 0
We arehere to offer the latest version for vidmate App for pc is available for free download right now. Vidmate is the most used...

admin - January 11, 2020 0
While numerous grown-ups trust that youngsters carry on with an actual existence of facilitate, this is absolutely not really in every case...