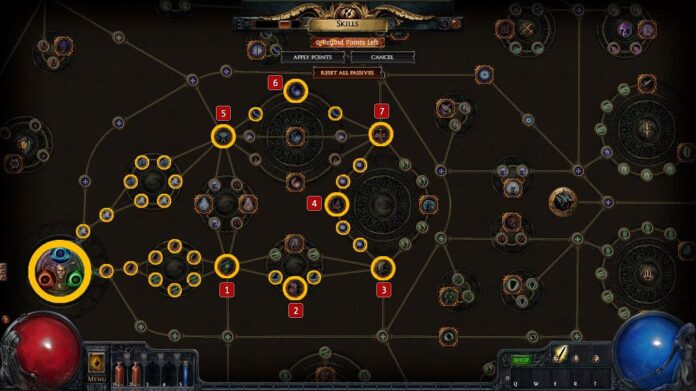 With an influence on stealth kills and critical hits, this class stands apart from others in the game to give you a far bigger sense of individuality. That being said, those who don’t use it correctly may give up on it just a bit too easily, which is why you should look into the following tips so you can make a character that can produce some of the biggest hits in the entire game.

Path of Exile has something that a lot of other titles of the same ilk don’t have. It has a special way of keeping itself fresh by having active skill gems for you to use. Even though there is a lot of options, this in turn does present an issue, particularly for newer players. This is because you are going to want to focus on experimenting.

The reality is that you will want to put your levels into a skill that you find useful. With that being said, you should find a skill that you are interested in using and stick to working with it. Keep working on the offensive side of matters so that you aren’t switching too much, and you will soon see exactly what the Shadow Class is capable of.

Out of the Ascendancy choices that you have as the Shadow, many would consider the Trickster to be the best. It is one of the features that attracts players to the Shadow skill in the first place, and is often placed at the top of the list when looking at the best choices for Ascendancies. The reason being is that it is capable of providing the Shadow with very sufficient attack and defense, so you should certainly consider it when choosing which Ascendancy you are planning on using.

Protect Yourself with a Shield

Whether or not you use a shield depends entirely on if you are going to be using certain skill gems. Your goal as the Shadow class is to keep up the offensive, and shields can help with this if you don’t have dual-wielding perks. Since you would be using a shield to help with your defenses, you can then focus on using the rest of your gear for boosting your damage output instead of having to worry about protecting yourself since you have a shield.

The Shadow class is hardly renowned for being a prominent spellcaster when compared to other classes in the game. However, it is worth mentioning that you shouldn’t just avoid the Shadow’s mana completely. You should keep in mind that you can use a lot of spells that can protect you or even compliment one of the Shadow’s attacks. Whether or not you do choose to opt for a shield as we discussed above, there are spells that can help you increase your damage or defend you in the heat of battle.

On the subject of mana, there is also the use of Blood Magic, which instead drains health over the blue globe. As discussed, the Shadow has some great uses for mana, but is it the same case for using Blood Magic?

Ultimately, how effective it boils down to whether or not you have some form of life steal, as this is more effective than spell drains in that you can get your health back quicker than casting it. This method is much more dependent on you as a player, so do not worry if it isn’t for you. If the prospect does sound interesting, however, then it most certainly deserves serious consideration considering just how powerful it can be.

Even as a beginner, you are probably more than aware of the effectiveness of debuffs when taking on enemies. However, when you are playing as the Shadow class, you should also consider the use of ailments for additional damage.

You won’t have to concern yourself too much in terms of which ailment you are using. The fact is that you can use pretty much any, even elemental ones if you have to. The most effective with Shadow skills include Poison or Bleed, so use them if you can.

There are PoE items that you can purchase with your PoE currency that you find on the PoE trade to help your Path of Exile build, but ailments are definitely up there with the most effective.

Have you tried the Shadow class in Path of Exile? Let us know in the comments section below!