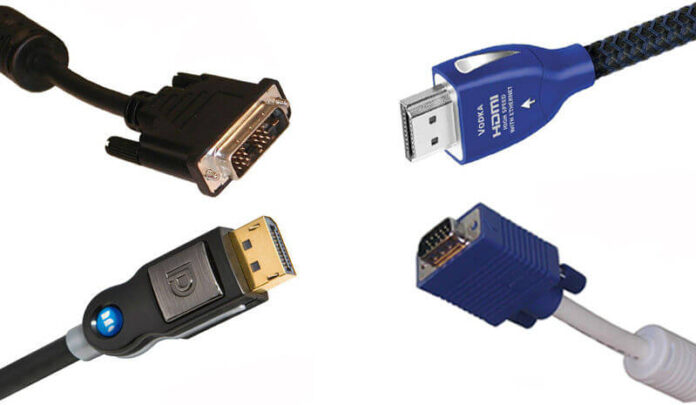 Have you considered using a DisplayPort or HDMI to project your player device to a display device like a screen or projector?. The DisplayPort and the High Definition Multimedia Interface (HDMI) are modern technology used for transmitting video from one display device to another through cables. Both serial interfaces work for the same purpose of carrying video. So what is the difference between the two?

Is DisplayPort Better than HDMI?

Long before these modern serial interfaces came, what served their purpose were the analog interfaces such as the s-video, RGB, and VGA. To transmit High-Definition (HD) format video and audio, you’ll require an interface with a high data rate. Both DisplayPort and HDMI are high-speed data digital interfaces. However, they do not serve the same objective in similar ways. One works better than the other. To understand more, let’s dive deep into their functionality.

In the past, video and audio were in analog formats until the big entry of CDs and DVDs, which introduced digital video. Following that, broadcast television went digital and required digital interfaces to transport digital data to replace analog interfaces like S-video and composite videos. At first, the DVI (digital video interface) was used for the task, but with the ever-growing technology came the HDMI cables, which has become a highly consumed and a standard product in the electronics industry.

Analog computers and video monitors use input from video controllers, which use Digital-to-analog converters (DACs). The DACs convert analog signals to a digital video display. Analog interfaces such as VGA have been the standard interface for computer video output. However, the DisplayPort is rapidly replacing it as a video interface standard for laptops, personal computers, and many others. At www.officeconsumer.com, you’ll get the best products for digital interfaces.

DisplayPort is a Video Electronics Standards Association (VESA) standardized digital display interface. It was developed by a consortium of PC and chip manufacturers as a follow-up on DVI and VGA standards. DisplayPort represents the standard for connecting laptops and PCs to video displays. It is also available on docking stations, video graphic cards, and projectors, and it can also be used on other consumer electronics. However, it is not as common as the HDMI.

Since its introduction in the year 2006, many versions have been released to improve the previous one. The most recent version on the market right now is version 1.2, with high-performance features. This version supports video resolution of up to 3840 x 2160 pixels and supports almost all 3D video formats.

HDMI is a video interface standard by the HDMI Forum. The standard was first released into the market in 2003 with many updates. The most recent version is V1.4, which complies with the EIA/CEA-861 standards that guide video formats and transmission of video and audio. The entire consumer electronics sector has adopted HDMI as a universal video transmission standard.

Difference Between DisplayPort and HDMI

Both the DisplayPort and HDMI produce a high-definition video. Here are a few differences:

DisplayPort V1.2 supports a video resolution of up to 3840 x 2160 pixels for the current standard versions and at a speed of 60 Hz. DisplayPort also works for all 3D video formats. The DP V1.2 cable can send a maximum bandwidth of 17.28 Gbps, while DisplayPort V 1.4 sends up to 25.92 Gbps.

The commonly used HDMI is version 1.4. it supports a similar resolution as DisplayPort V1.2 but at 30 Hz. The maximum bandwidth that can be sent through is 10.2 Gbps.

Both video interfaces support a maximum of 8 digital audio channels at high speeds of up to 192kHz and 24 bit. The difference is that HDMI contains an Audio Return Channel (ARC), which means that sound can flow in both directions, i.e., from player device to display device and vice versa. An example of this application is when you’re streaming on YouTube on a smart TV but using the AV receiver’s sound system other than the TV’s inbuilt speaker.

Although both digital video interfaces serve a similar purpose, they have distinctive features that differentiate their capabilities. Both HDMI and DisplayPort display the same image quality. In both interfaces, the newer the version, the higher bandwidth and resolution it supports. DisplayPorts can achieve higher bandwidth than HDMI cables and are advantageous when you need to connect multiple monitors to your laptop or PC. HDMI supports an ARC, which comes in handy when you need to connect a TV with a home theatre set.

The Role of Managed Services in Providing Internet Services

Family Escape Room Near Me: How To Choose the Right One